Have you ever heard of someone taking their cat to get “fixed” only to find out the cat’s already sterilized?  Well now you have!

A few weeks ago, I wrote about making an appointment with the spay shuttle for a new kitty that adopted us.  Well I have an update.  On the appointed day, I dropped Miss Kitty off at 8:30 AM and was told to return at 3:30 PM for pickup.  Around noon, I received a call from the vet at the shuttle.  She started slowly and even sounded confused as she asked, “Ms. Raffey, um, you brought Miss Kitty in this morning to get spayed?”  “Yes,” I replied.  “Well, hmm, she is already sterilized.”  Not making the connection that sterilized means “fixed,” I stammered, “What?” “She has been sterilized,” the vet repeated.

I was shocked.  “How long have you had her?” Still trying to comprehend this news, I weakly said, “About two months.”  It had actually been a little longer.  The vet said, “Well she’s yours then, we’ll go ahead and put the chip in her, she’s yours.”  I was surprised that this kitty had been sterilized but did not have a chip.  I questioned the vet about this and she confirmed that was the way it was.  And as if this wasn’t strange enough, I was shocked once again when I picked her up.

You see, I had assumed Miss Kitty was just a kitten.  She is small and very playful, just like kittens are.  Her “meow” is soft and whiny, just like a kitten.  She has no fear, and the other animals, even the dog, steer clear of her.  As it turns out, she is full-grown.  Based on her teeth, the vet estimated her to be three and a half years old.  Did I mention she has a bobtail?  Not exactly the same breed as a domestic short hair cat with  a tail.  But she is lovey and playful and just as cute as could be.  And it makes me wonder if someone is missing her.  It makes me wonder why she didn’t have a chip, as it usually comes with the “fixing” these days.  I have a couple of reasons why I don’t like the idea of micro-chipping, but it is a solution to not loosing your pet.

She has a habit of sticking her tongue out, and keeping it there! 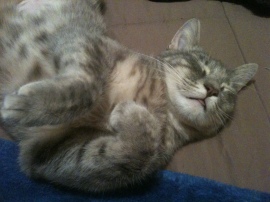